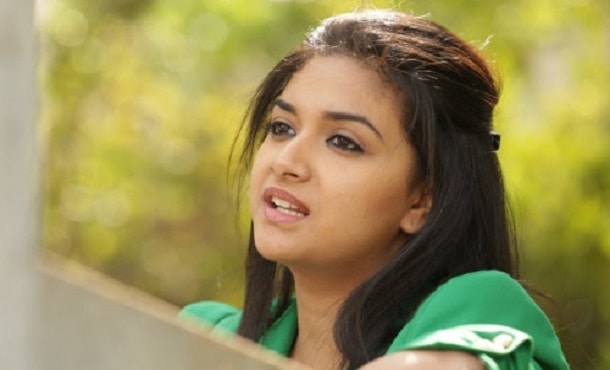 Keerthy Suresh is a Tamil, Malayalam and Telugu Movie actress. She was born on 17 October 1992 in Chennai, Tamilnadu, India.  She was made her screen debut in 2000 as a Child Artist  With Malayalam Movie ‘Pilots’. Keerthy Suresh also worked three movies as a child artist including Pilots,’Achanayikistam’ and ‘Kuberan’. Due to her mind-blowing performance in the field of acting, she was awarded several awards and titles. if she would not actress then she would have been a fashion designer.

Keerthy Suresh Father has Suresh Kumar worked as a Malayali film Producer. Her mother has Menaka worked as an actress. She has one elder sister Revathy Suresh works as a VFX Specialist. Keerthy did her High Schooling from Kendriya Vidhayalay, Pattom, Thiruvananthapuram. She Completed Her Degree in Fashion Design from Pearl Academy, Chennai, Tamilnadu. During school days  Keerthy Suresh was a Swimming Champion. At Present Time she has Unmarried.

Keerthy Suresh had Affairs with Sathish(Comedian, Rumour). She considered as the highest-paid Bollywood Actress with the estimated net worth INR 2 million and Salary 1.5 crore per movie.